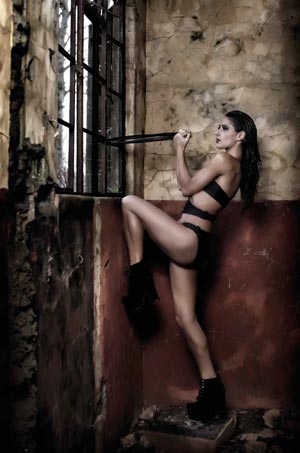 For this issue I decided to do something different. I've always been a great believer in the old saying that it is not about equipment, and always encourage people to spend money sensibly on kit they need and not go crazy buying every expensive gadget known to man (and woman). I've never gone for spending silly money and prefer to keep things as simple as possible. Yes, we need good equipment, but I see so many photographers, especially new ones, going buying every piece of kit that comes out in the hope it will suddenly change their work. Here's the thing folks...it won't. The only thing that can change your work is what is inside your head. Learn the equipment you have, master it, and focus on your eye and imagination before buying gadgets galore is my advice. 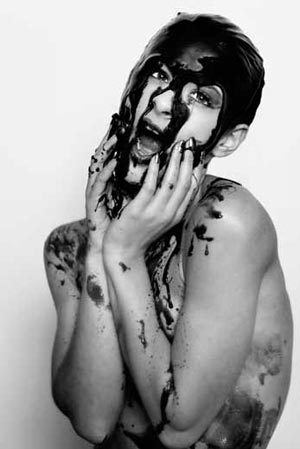 So, with that in mind, I got my model Natalie prepared, bought a ball of wool for ?1, a bottle of treacle for ?1, and set off to shoot in a derelict building near Inverness. The shoot was with one 41/2 year old Canon 5D MK2 camera, and my 50mm f1.4 lens. Lighting for the shots here was a Canon 580EX2 flash fired through the Westcott Rapidbox, which is a very cool and relatively inexpensive piece of kit.

The lighting was to be quite subtle, as there was a reasonable amount of daylight in the building, so an ambient light reading was taken first to decide what was needed. The ambient reading was 1/60th at f4. I then assembled the Rapidbox, which literally takes seconds. It opens like a brolly, a bracket pops out to attach to the stand, drape the white cover over the front, and you're ready to go. The flash slides onto the bracket and that's it! Seemples. I set the flash up on manual and connected it to a Pocket Wizard. I had decided I needed f4.5 on the flash so fiddled about with the manual settings until I got that, and then controlled the overall exposure using the shutter speed. We had window light to camera-left and the flash was set up at 45 degrees camera-right.

There are 112 days to get ready for The Societies of Photographers Convention and Trade Show at The Novotel London West, Hammersmith ...
which starts on Wednesday 17th March 2021