I just don't do 'personal 'work. I know it sounds odd. Aren't we all supposed to live and breathe photography? Where's my passion? Where's my dedication?

Don't get me wrong; I'm incredibly passionate about photography and being a full-time professional for over 11 years I think I've earned my stripes when it comes to dedication, hard work and sheer obsessiveness about creating the perfect image. It's just that if I am going to go to all the trouble that I promise I will, I'm going to make sure that somehow or other it's more than just my ego that's basking in a warm glow. As far as I'm concerned all of those images have got to get up in the morning and work hard for the greater good of Casa Marko and the future success of Studio Marko Let me give you an example. In February 2010, the gorgeous city of Bath, where my studio is based, came up with the ingenious idea of holding a Fashion Festival. Sensing an opportunity I talked to the town centre manager, Andrew Cooper, and agreed to set up a fashion shoot as part of this event. The images would be used on posters, the events programme, various publications and media outlets. They would also run as a feature and front page in the very upmarket Bath Magazine. 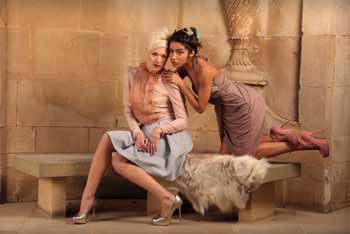 The shoot took place over two evenings in the glorious splendour of The Roman Baths and The Georgian Assembly Rooms. Having those buildings virtually to myself was almost worth it alone!

The shoot meant lots of promotion for the festival, lots of PR and direct advertising for Studio Marko, and lots of people very happy with aforementioned photographer.

Did we compromise artistically? Not one bit of it.