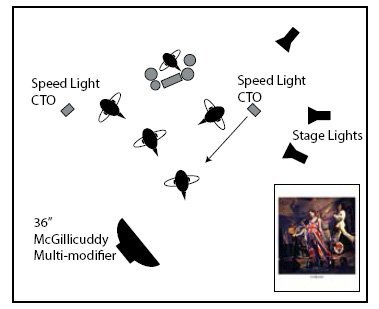 Micro 4/3s has really turned my world upside down and I'm loving every minute! Since I had the pleasure of writing for you all last time it's literally been none stop...

The point being I was absent from the last magazine, I apologise, and now bring you the images from our Convention show 'The very best of British'.

Now this actually isn't as egotistical as it sounds, my Who tribute band followed the theme of 'Best of British', entertained the 120-ish in the room and most importantly gave me my first shooting opportunity.

This image was lit with three simple, manually controlled speed lights and by extolling a technique our American friends call 'pop and burn'.

The whole point of the image was to make it look like theatre, so my two accent lights were covered in gels, one a CTB placed to camera-left hidden by speaker stacks. The second to camera-right covered in a CTO.

This was allowed to wash more liberally over the set.

I wasn't as manic as I usually am in hiding these, after all it was supposed to look like a live stage performance so flare and spill really was the order of the day.

My key or main light, the light that gives the prevailing direction, shape and form to my main subject was, once more, a simple manually controlled speed light, shot through and modified by my 36" multimodifier.

This was angled to give me the best possible 'butterfly' pattern on Danni's face that the situation would allow. I'd got Ste, one of my assistants to remove the outer diffuser from the 36" multi-modifier as this would increase the specularity and contrast in the light's quality, giving me the look and feel I was after.

As a slight side bar I just want to thank all who voted for my modifiers, 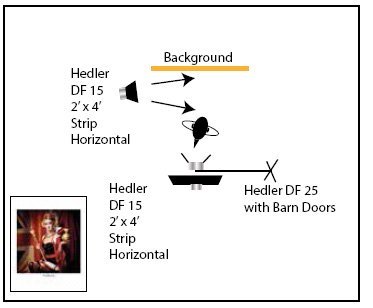 you've no idea how proud I am to have won 'Best Professional Accessory' two years in a row at the trade awards - thanks guys and long may they serve you well.

Ok, so what's the 'pop and burn' bit? It is as simple as dragging the shutter. In other words choosing a slow shutter speed in order to mix some of the available light into the shot, in this case some of the stage lighting I'd asked the band to turn on. As you can see, mixing the flash with the ambient gives a really cool look. The other advantage is a slow shutter speed allows for fast movement to start to register as a blur.

The image was captured on my EM-1 with the 17mm f1.8 (34mm on full frame) from a kneeling position to exaggerate the length of the model.

My second shot was a more traditional beauty shot, with a little styling twist pulled off by Zoe my MUA and, more importantly Lesley, who built the props.

I lit this image with my favourite continuous lighting system, Hedler HMIs, these are beautiful, beautiful bits of kit, the fresnels are to die for.

This again is a simple three-light set-up. The 'Key' was a DF25 focusing spot, fitted with four-way barn doors and a screen of diffusion 'frost'. The beam was quite tightly focussed to concentrate the viewer's eye to Her Majesty's upper body and face, the 'frost' just softening the light slightly.

The barn doors further allowed me to control the spread of the light.

What you don't light is often far more important than what you do!